For a few years now, I’ve been stating my plans for the rest of the year, and reviewing how the previous year went. Here’s the review:

This intel/OSINT/OPSEC topic has bugged for a few years now and thanks to Edward Snowden, I think I chose a good year to work on it. I put a ton of research time into formalizing what an intelligence gathering campaign would look like, and even implementing it. I even wrote some tools to help me get the job done. I presented my research at GrrCon, RSS, and BSides Detroit. I’ll admit, it’s a bit of a fluffy, opaque subject to talk about, which is why I really wanted to do the research and be done with it. The output from the research is just some new tools in my aresenal.

Hardware Hack into a PCB

Last year, although I was messing around with my hardware hacking project (that I was asked to take down), I never moved it from a proof-of-concept breadboard, to my own custom circuit. This year, I was able to build a couple circuits and get the fab’d. But I didn’t design them so I still think that’s cheating. Going through the process of loading an Arduinio with AVR software was a big enough step. 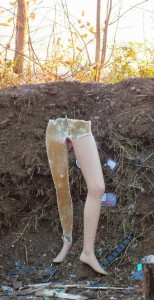 This was a failure. Some of us still talk about it but I didn’t build an iButton door system. I have all t he hardware and Raspberry Pis to do it, I just haven’t put the time in.

My poor mannequin has been around for years. I’ve chopped her head open and loaded her up with an xbee controlled arduino, I’ve made her my T-Shirt model for BSides Rochester, but this was to be the year of her demise. I accomplished this in a fantastic fashion though using Tannerite – an explosive that we packed inside of her.

This was just a fail. I didn’t print anything really. We used a 3D printer to make the badges for BSidesROC this year, but I never actually went through the process myself.

There have been some interesting unplanned accomplishments this year:

This is the year I know I’m going to have to and want to do some what I would call Grown-Up Things. Things that aren’t necessarily about completely full blow chaos and fun. One being learning about how businesses work, forming an LLC, and paying attention to financials. There’s some other things but where’s the fun in discussing that. I just know that this year will be filled with a lot of “Adult” opportunities.

Although I have a decent understanding of crypto, I’d like to put some time in and develop this into a skill. A friend of mine is taking the Stanford Cryptography class and I’m hoping we can learn that together. But beyond that, I’d like to apply it to some actual research. Maybe doing some basic crypto audits of something like BitMessage. I’ll never be a cryptographer, but I’d like to be able to identify and exploit poor cryptographic implementations.

I’m have a decent ability to make something in Python, but it’s all scripting. I’ve never taken a class or anything that would give me any kind of structured development style. My goal for this coming year is to further build my development skills beyond just scripting and hacking things together. Ideally I’d like to join a development team on a project of some kind.

Gah – Bitcoin… when I say it out loud it sounds so stupid. But this year I’ll be putting time into learning how the bitcoin protocol works, the community that supports it, and slightly riding the roller coaster as it goes up and down. Last year I was doing intelligence when Edward Snowden released all his intel, this year I may be doing Bitcoin when we watch the first crypto currency become regulated.

This year hasn’t taken me into much hardware reverse engineering lately. I’ll be looking for an interesting project to spend some time on.